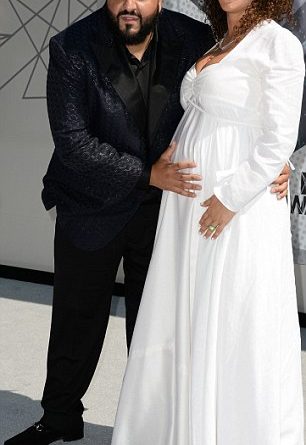 He had the chance to meet with president Obama at the White house and also attended the last correspondence of the Obama’s presidency. He is now signed to Roc nation and managed by the mogul Jay Z. Dj Khaled movie (Popstar)and latest music album(Major keys) are also underway. The we the best clothing line is exploding and growing( check Amazon.com).

The snapchat superstar is now on tour with the queen Beyonce on her formation world tour as the only star guest.

When Dj khaled says “Bless up”, he really means that, because the 40 year old rapper and his 11 years long time partner Nicole Tuck are expecting a baby(Young icon) for this fall. Dj Khaled girlfriend is 3 months pregnant reported TMZ. The Dj khaled family is expecting a new member, a Dj khaled junior(leave in the comment box a name suggestion).

This news comes as a great news because Dj Khaled has always been very secretive about his personal life and family till his big blow up on snapchat. Now all eyes are on Dj Khaled personal life. He often shares relationship advises on his snapchat while talking to Nicole. But he have yet to really show her on snapchat. Fans often only see her back or hair or parts of her body but not a full snap.

Dj khaled is now on tour with Beyonce and many people are expecting him to cool down to prepare for the arrival of the new baby. It is too early to start guessing names but fans can expect something original -the Khaled way.

Fans are now awaiting the ultimate shot at the pregnancy and the great news. It might not be easy for Nicole but it is part of the price to pay to be with a celebrity like Dj Khaled. We are sure she is happy about this big news.